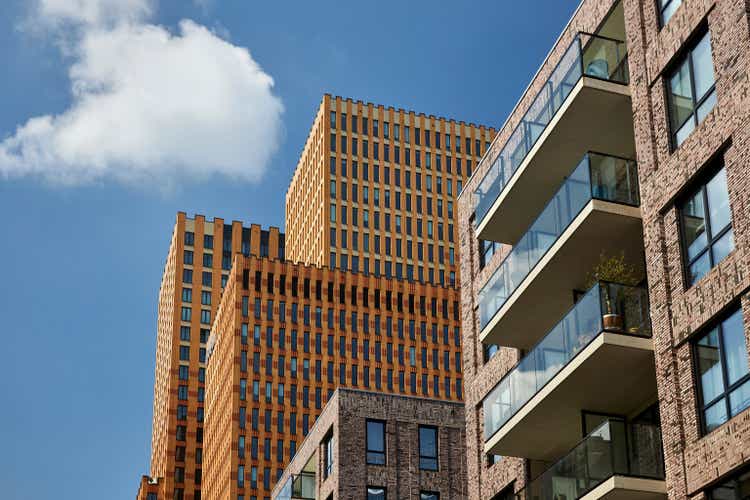 European residential property cap rates have been very low in recent quarters. The German residential real estate giant Vonovia (OTCPK:VONOY) got away with a cap rate below 3% and even Canadian REIT European Residential Real Domain (Toronto Stock Exchange:ERE.UN:CA) uses fairly low capitalization rates (currently at 3.38%) for its Dutch residential property portfolio. Although the REIT is attractive from an AFFO multiple point of view and a dividend yield perspective, I wanted to check how the balance sheet would be impacted by higher capitalization rates and how the AFFO would be impacted by an increase in interest rate.

European Residential Real Estate (“ERE”) trades on the Toronto Stock Exchange with ERE.UN or ERE-UN as the ticker symbol. The average daily volume is approximately 115,000 shares per day. There are currently 89.6 million units outstanding and an additional 142 million Class B limited partnership units that can be converted into common shares. For purposes of calculating FFO and AFFO, I am using a total number of units of 231.6 million because the interest on LP Class B Units is equal to the distribution on Common Units.

All financial results and data used in this article may be excerpt from SEDAR website.

The first half was strong

Since the purpose of this article is to see how ERE holds up when cap rates start to rise and its cost of debt also rises, I’ll be fairly brief on current financial results. The REIT will release its third quarter results very soon, but I didn’t want to wait for those results to complete an assessment of the impact of rising market interest rates on financial results.

During the second quarter of the year, European residential real estate generated just under €9.9 million of FFO, as you can see below.

Perhaps even more interesting than the FFO is the AFFO in this case. As you can see below, EE recorded approximately €1.06 million of “non-discretionary” capital expenditure and should therefore be considered regular sustaining investment. The AFFO was EUR 8.7m or EUR 0.038 per share. On an annualized basis, this means that ERE generates approximately EUR 0.15 per AFFO share. That’s just over C$0.20, making the current stock price of just over C$2.80 quite attractive for a residential REIT focused on a first-world country.

I find it intriguing that the REIT is using planned sustaining investments, as it helps ERE gradually roll these expenses into the AFFO rather than suddenly having to record a high level of investments. As you can see below, only EUR 182,000 of maintenance investments were actually incurred and EUR 1.06 million represents the planned maintenance investment needs.

Although first half results were strong and I expect the REIT to perform similarly in the third quarter, the market sold off the European residential REIT along with the rest of the market. There are two major concerns here that contribute to the massive sell-off. Higher interest rates raise fears of higher cap rates while the cost of debt obviously rises as well.

It’s quite low and will definitely start to rise. I think it makes sense to compare the cap rate with the Dutch 10 year government bond yield and as you can see below that bond yield has increased by 240 basis points since December 31 and although there is no 1:1 correlation in increasing cap rates, I do not expect a 3.38% cap rate to remain achievable . Ten months ago, real estate was valued at a mark-up of around 335 bps above the risk-free interest rate. Currently, the 3.38% capitalization rate used for Dutch real estate represents a margin of less than 100 basis points.

So even if you increase cap rates to nearly 5%, the stock is still trading at a discount to NAV. That’s not the problem. The main issue at this point will be the LTV ratio, as applying the €948m net debt to the €1.58bn fair value of the assets would result in an LTV ratio of 60%. That’s uncomfortably close to the upper limit of 65% debt-to-gross-book-value and it could potentially exceed the debt-to-market-value limit of 60% if nothing happens.

This should not be a reason to panic as ERE will also keep part of its profits in the form of equity. The current monthly dividend has been set at EUR 0.01 per share. This represents EUR 0.03 per quarter and as ERE generates approximately EUR 8.7m in AFFO in Q2, this essentially means that EUR 1.75m per quarter is hoarded in undistributed AFFO. In addition, ERE implemented a dividend reinvestment plan and in the second quarter was able to retain just under 2.5 million euros in AFFO by issuing new shares instead of a cash payment to some of its shareholders. Based on Q2 performance, ERE will be able to keep at least EUR 15m (and probably more) of AFFO on its balance sheet, which will have a positive impact of 95 basis points on the LTV ratio. Of course, I expect NOI growth as rents will be increased, but even in a status quo situation, ERE will be able to somewhat offset the impact of higher cap rates on its debt ratio. .

There is a caveat here: the impact of higher interest rates on the FFO and AFFO may actually put these results under pressure. But let me start with this: ERE has the time advantage. All of its debt has a fixed interest rate (either because the rate was fixed when the borrowings were entered into, or because it entered into interest rate swap contracts). This was a brilliant move on the part of ERE’s CFO as it allowed the REIT to take full advantage of the ultra-low mortgage rates we have seen in Western Europe in recent years. This translates to an average interest rate of just 1.77% on mortgages despite recently securing a more expensive mortgage with a cost of debt of 3.29% (and it looks like ERE will soon have to pay an interest rate on its debt higher than the current capitalization rate of the assets).

Although there is little risk of refinancing in 2023 and 2024, we must be prepared for a very substantial increase in interest rates. The total debt on the balance sheet (mainly made up of mortgages as indicated above) amounts to €963 million and an interest increase of 150 basis points would cost the REIT an additional €14.4 million in interest charges. annual interest. This means that interest payments would double, causing the AFFO per share to decrease by more than 40%.

And since the risk-free interest rate has increased further since June, the month when the new (expensive) mortgage was taken out in June and the Dutch 10-year government bond is slightly more expensive now.

Fortunately, ERE has some time, as rent increases will increase the NOI, making interest rate increases more palatable. But that may not be enough. Even if ERE is able to increase its NOI (based on current assets, therefore excluding the sale or acquisition of additional assets) by 7% in 2023 and 5% in 2024, the quarterly AFFO would only increase still “only” EUR 1.9 million per quarter, which would not be enough to offset longer-term interest increases.

Although I think the current capitalization ratio of 3.38% for Dutch residential real estate is too low given the current market circumstances and the evolution of the risk-free interest rate, I think the ERE is in a good position to mitigate the impact of rising cap rates (which won’t suddenly jump 100 or 125 basis points overnight, so ERE has time to make its balance sheet even stronger).

While ERE isn’t perfect, I like the balance sheet much better than big German competitor Vonovia, where the LTV ratio could come under severe pressure in the coming quarters and years. ERE’s distribution is currently well covered, but going forward, it will be important for ERE to increase the rent it charges its tenants as it has to renegotiate maturing mortgages to obtain the best rate of return. possible interest. It is not the NAV or LTV ratio that is at issue here, but the impact of rapidly rising mortgage interest rates.

I’m starting to get interested in ERE.UN but I don’t have a long position yet. I hope that the next rent increases will preemptively solve the impending refinances, which will be more expensive than current mortgages.