The state of real estate 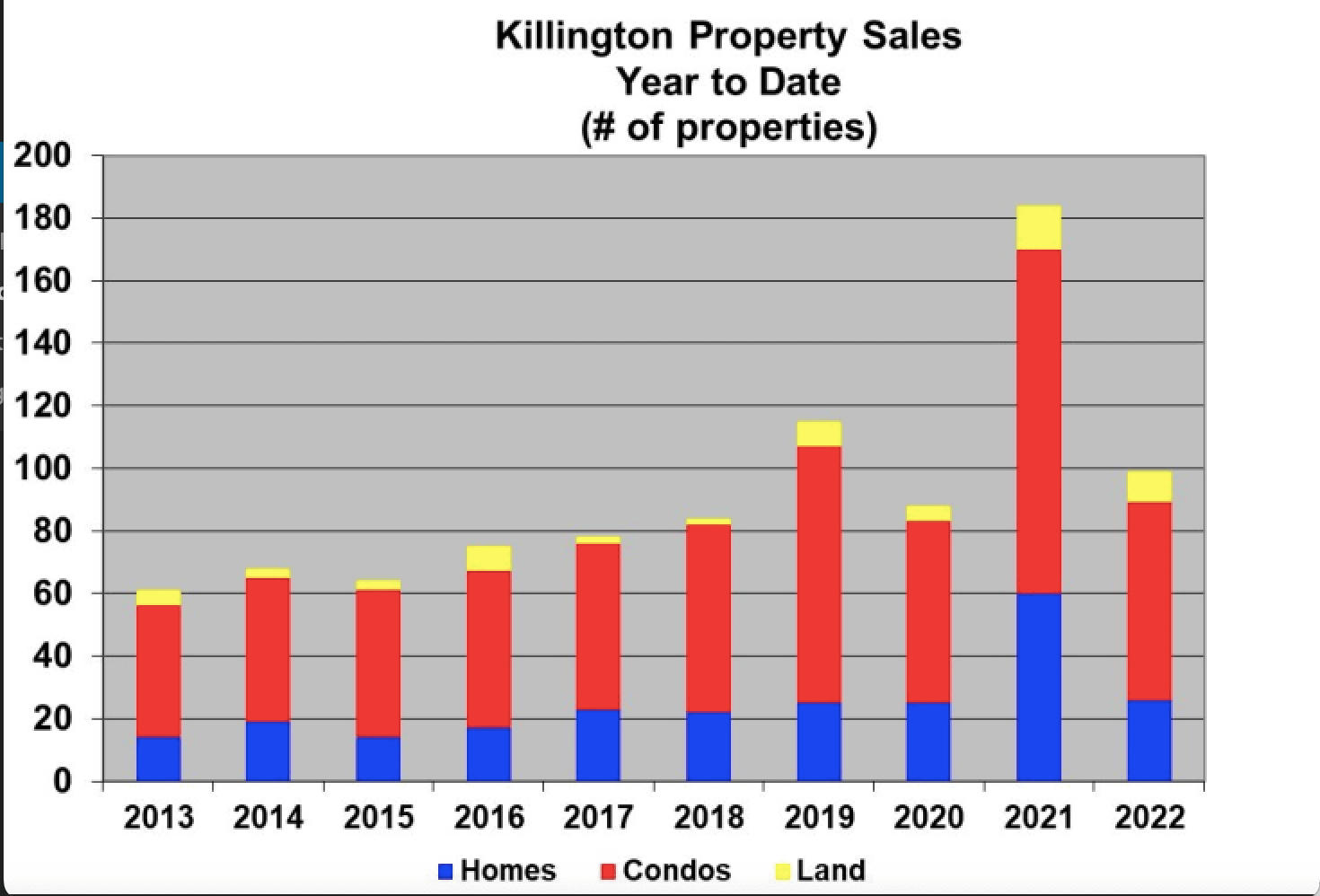 Real estate market slows due to lack of inventory

After a home-buying spree throughout the pandemic, housing stock in Killington (and surrounding communities and across the United States) is the lowest local real estate agents have seen, which has put an end to the frenzy of real estate activity.

There were three family homes on the market in the Killington area on November 16.

“I don’t think I’ve ever seen so many,” said Bret Williamson, owner of Killington Valley Real Estate. “Usually, well-priced homes go away pretty quickly,” he said. “The condo scene is pretty much the same. There really isn’t a lot of inventory here. This does not surprise me. Killington has a ton for that.

Heidi Bomengen, owner of Prestige Real Estate, said there would typically be 100 properties on the market right now.

Kyle Kershner, owner of Killington Pico Realty, said the market is “probably approaching historic lows.”
“It’s not unique to Killington,” he said. “It’s all over the country.”

According to the National Association of Realtors’ 2022 Annual Report, a total of 57% of real estate agents in the United States cited lack of inventory as the main reason preventing potential clients from buying a property.
Kershner said soaring interest rates discouraged homeowners from selling.

“They would be crazy to sell and trade their 2 1/5% mortgage rate for a 7% mortgage,” Kershner said. “Unless they have an obligation to sell, they won’t. They will wait for that. It really is a waiting game.
Although there are still interested buyers, real estate agents said homes were staying on the market longer and receiving fewer offers than last year. As always, buyers come primarily from New Jersey, New York, Boston and Connecticut. Many are looking for vacation homes or investment properties rather than primary residences.

More and more buyers are asking, “Can I rent it out?” Instead of, ‘How are the schools?’ said Nathan Mastroeni, broker for Four Seasons Sotheby’s International Realty in Killington.

The days of buyers buying homes on sight and without inspections seem to be over, agents in the area said.
Kershner said the level of real estate activity had seen a “major shift” in the past year.

“I’m not going to say there aren’t any buyers,” Kershner said. “I’m still listing properties and getting multiple offers, but it’s a different pace now.”

Last year, Kershner recalls showing a property 17 times on day one and receiving 18 offers on day two. Now he can see 3-5 offers on each property.

“There aren’t multiple screenings on the first day,” he said. “We don’t see these bidding wars.

6-12 months ago, if you were financing, you were pretty much out of the game. You were going to be facing a cash buyer.

But, for the right property, “there’s still a lot of competition,” Kershner said.

Kershner listed his own 11-acre land in Stockbridge for sale for $119,000 in early November.

He had several offers and expected it to sell for 10-15% above the asking price, he said.

Home prices are still higher than they were a year ago, but the increases are starting to level off.

“It’s not as free for everyone as it is during Covid,” said Kaitlin Hummel, agent at Prestige. “People think, ‘OK, am I paying too much? Is it worth it to me?’

Mastroeni said about one in five properties had multiple offers. The longer a property stays, the lower the prices.

“It took a little longer to sell and prices stabilized,” Mastroeni said. “Price acceleration has really calmed down, which is good in many ways. If your price is right, you may still be in a situation where you see multiple offers. If your price is too high, you may be -be sitting.

Bomengen said last year that homes sold within the first week. Now the houses are on the market for at least two to four weeks. Most buyers are looking for vacation homes around $300,000.

“What still surprises me a bit is the number of investor buyers — people looking to buy and rent,” Bomengen said. “I thought it would have slowed down depending on how prices moved. You have to do a lot of rentals.

But, she says, rental demand is strong, echoing Williamson’s statements.

“I’ve been doing sales as well as rentals for 20 years,” Williamson said. “With the Airbnb and VRBO event, the short-term rental market is very popular, so it is removed from the inventory of long-term winter seasonals for November-May. Now that’s not really an option anymore.

The 30-year fixed-rate mortgage averaged 6.61% in the week ending Nov. 17, down from 7.08% the previous week, according to Freddie Mac – the biggest weekly drop since 1981. that down, it’s still more than double the rates from a year ago, when the 30-year fixed rate was 3.10%. Experts predict that interest rates could climb back above 7% before the end of the year as the Fed pledges to raise the funds rate to reduce inflation.

Meanwhile, the National Association of Realtors predicts that overall transactions in the United States will be two million transactions lower than last year in 2021.

Williamson said Killington was 6-8 months behind the national news.

If the inventory improves, there is always demand. Most Killington home buyers are willing to pay cash.

“Interest rates and things of that nature don’t seem to affect this market as much as a core home market would,” Williamson said. “There’s still a ton of interest.”

Despite the lack of inventory, “it’s still a relatively healthy market contrary to what national news will tell you,” Mastroeni said. “In the national news, the world is ending, the real estate market is ending with it, and no one will ever sell a house again.”

Kershner said there is an affordability crisis across the country.

“Prices are at record highs,” he said. “They’re about 28% higher than last year,” Kershner said.

Still, Kersnher said “there is nothing alarmist to do this winter”.

As interest rates rise, sellers may have an incentive to lower their asking prices.

“Experts are anticipating a 5-10% correction in house prices,” Kershner said. “I think we’ve been in this for a while. The Fed is not done raising interest rates.

Killington’s slowest selling time is usually May and June and November to January. Bomengen said inventory is unlikely to improve this winter.

“People will start listing properties again in the spring,” she said. “What we see then will completely depend on the economy.”

Williamson was hopeful for the future of real estate in Killington. He said planned property developments and investments in the area will keep the market healthy.

“It’s really exciting,” he said. “I think we are by far the best resort in the East. We offer the best in skiing, terrain and year-round activities. To see neighboring resorts asking significantly higher prices for their real estate, it doesn’t surprise me that Killington has been on the rise for two years and the future looks bright.

Until then, Kershner was hailing the break.

“After going 100 miles per hour seven days a week, there’s more time for me right now,” he said. “I’ll take that. From a business perspective, it was phenomenal but very taxing emotionally and on your time, your family time and your personal time. All of that had to be put aside. It’s good to have a part of his life.