Who was Elizabeth V. Poulos? 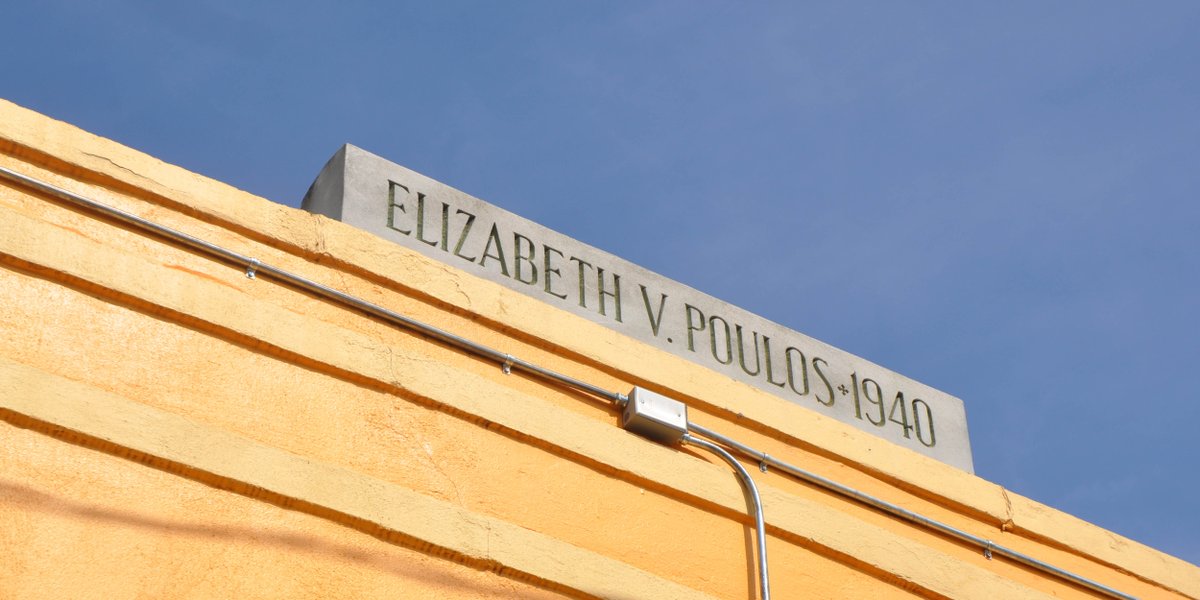 Dear Vance: Why is an engraved stone “Elizabeth V. Poulos” with the date 1940 mounted on top of the Peabody and Cooper Eclectic Eye building? — DC, Memphis.

Dear DC: Every time I’ve driven through this area and noticed this stone, I’ve wondered about it. Over the years I have received at less a dozen queries asking who this person was and what the stone means. However, every time I looked at it, I hit a dead end, so after about 20 minutes, I usually retreated to the comfort of my La-Z-Boy.

But in May, Fannie and Robbie Johnson Weinberg, the mother/daughter owners of that building, announced plans to convert half of it — for years at State Farm — into a gift shop called Paradox at PeCo (“PeCo” being shorthand for Peabody and Cooper). Hearing this, I feared that they would remove the old stone, so this time I put extra effort into solving this mystery.

I knew I couldn’t do it alone, so I recruited fellow historian, Bonnie Kourvelas, producer of many of the best Memoirs of Memphis segments aired on WKNO-TV (“Beyond the Parkways”, “When TV Came to Town”, “Lost Memphis”, and others). Surely, with our combined intelligence – enough to light up a small town in Arkansas – we could answer DC’s question.

I won’t bore you with accounts of the hours, days, and weeks we spent combing through city directories, newspaper archives, and birth, marriage, and death records for, once again more, come back empty-handed. But eventually, we uncovered key pieces of the puzzle and were able to solve this mystery. Well, most anyway.

Elizabeth Harris was born in Glossa, Greece on June 24, 1900. I don’t know anything about her early life, as I was not living in Greece at the time, but at some point she left her home country and moved to America.

Now hold that thought, because this is where I introduce you to a man named Vasileios Anagnostopoulos, who played a major role in this saga. Born in the village of Gregory, Greece in 1893, he immigrated to America in 1914, landing in New York. One of the first things he did in his new country was to “Americanize” his name to Victor Poulos.

The next step in his journey was to move to Memphis. I don’t know exactly what brought him down south, but I suspect some Greek friends assured him of a good job here. It’s not a wild guess. He first appears here in a 1922 town directory running two restaurants – the Famous Café on Lamar and the Willett Inn on South Parkway – a remarkable achievement for someone with no connection to this town.

Bonnie, whose last name suggests her Greek connections (her husband, Nick, is of Greek descent) says: “Records show a tidal wave of Greeks who came to Memphis around 1915-1925. Greek immigrants tended to gravitate towards dining, and there were so many restaurants and cafes in Memphis because of all the train stations and the river and railroad traffic. They would follow a friend or family member who came to Memphis and could help them find jobs once they got here. From the stories I heard, these Greek immigrants were some of the hardest working and thrifty people you could ever meet.

Oh, and Bonnie tracked down Victor’s naturalization papers, which show he applied for US citizenship a year after arriving in Memphis – in 1923 – but he didn’t complete the long process until 1927.

Over the years, city directories tell us that he managed or was involved with other small restaurants and canteens in the city, including the Bell Café on Vance, the Southern Café on East Calhoun, the Lenox Café at Cooper-Young and the Log Cabin Café. to Frayer.

Elizabeth Harris married Victor Poulos in Crittenden County, Arkansas on August 10, 1939. Interestingly, the marriage license clearly identifies the newlyweds as residents of Memphis, so why did they cross the river to get married?

OK, now what has Elizabeth been doing all this time? Well, so far we haven’t found much information about her. Let’s face it, searching for someone with a fairly common name like Elizabeth Harris yields more (usually wrong) “hits” than someone called Victor Poulos. City directories, in fact, list a dozen women with that name living here in the 1930s. Who is the “good one”?

Well, one of those Elizabeths crossed paths with Victor, and it was more than a brief encounter. Bonnie – who (I admit) seems to do most of the work here – presented a marriage certificate, revealing that Elizabeth Harris married Victor Poulos in Crittenden County, Arkansas on August 10, 1939. Which is interesting is that the marriage license clearly identifies the newlyweds as residents of Memphis, so why did they cross the river to get married? We may never know.

But we are now approaching the crucial year of 1940 – the date inscribed on this mysterious stone. Again, I give credit to Bonnie for uncovering a series of real estate transactions that took place in the late 1930s. One is a deed of purchase of property on South Cooper, signed by Elizabeth and Victor. It was a vacant lot, at the intersection with Peabody, and the following year Mr. and Mrs. Poulos erected the building which now stands at 246-248 South Cooper.

Victor did not open his own restaurant there, as one would expect from his previous jobs. Instead, as soon as construction was complete, he rented 246 to Effie Appling so she could open LeFleur’s flower shop. Next door, he rented 248 from Dr. James Teas, who ran the Peabody Five and Dime Store, and also used some of that space to treat patients.

But what about stone? Listen, I’m going to take a risk here and say that Victor installed this on his new property as a tribute to his wife – perhaps to celebrate their new life together and the start of their new ventures.

Not for long, I’m sorry to say. In 1943, municipal directories no longer mention Elizabeth, which often means that the person is deceased. That’s what happened with Elizabeth, and there’s a good reason I never found a Shelby County death certificate for her. At the end of September 1942, she entered New Park Hospital in Hot Springs, Arkansas, for surgery to remove a tumor. I don’t know why she went so far for this, but she did not survive the operation, dying of heart failure on October 14, 1942. She was buried in Maple Hill Cemetery in Helena, Arkansas.

Victor remained in Memphis. He left the small house they had shared at 1012 Jackson, moving into the oddly named Magic Hotel at 192 East Calhoun, where he died on November 9, 1949. He was buried in Elmwood. The newspaper’s obituary provided curious details about his life. On the one hand, the headline was “Merchant Leaves Money for Starving Parents Abroad”. Apparently he left behind “a mother-in-law, brothers and a sister who were still alive, naked and starving in Greece”, and his will (“typed in Greek letters”) stipulated that they would benefit from his estate.

His property – namely, 246-248 South Cooper – was valued at “over $10,000 for tax purposes”, and Poulos said: “These buildings must be sold and the proceeds, after providing for the expenses of the estate. would go to family members in Greece, as well as the village church they once attended there. He also made a bequest of $5,000 to the Greek Orthodox Church of the Annunciation here, as well as a donation to the Reverend Bartholomew Karahalios “for prayers for his soul.”

I believe this concludes “the story of the stone”, but I can reassure readers of another detail. The Weinbergs promised me that the Elizabeth V. Poulos marker on their building will remain in place, where it has celebrated the memory of this woman — and intrigued all who noticed — for more than 80 years.

Have a question for Vance?